Two months of progress without a word.... 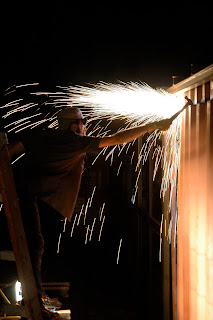 Here it is two months later and I've not written a single word about the hard work completed. I posted pics at the end of last month, but failed to discuss what had happened while they were taken. Since then much has been accomplished, but it doesn't look much different. In my last written update I discussed the window holes all being cut and glass and frames had been mounted. I was working on the big glass door and it really ended up taking almost a month to build and mount it.
Well.....it was mounted once, then taken down and remounted twice more. The bearing system proved to be a serious challenge. The immense weight and tolerances of the door complicated things and I learned a thing or two about bearing load and directional forces. Regardless, the pic and videos loaded on Flickr show just how easily the door now moves and rolls. It is WAY heavy, but impressive to stand next to and amazing to see it roll out of the way. I'm glad I took the route to build it myself, but it definitely pushed back my aggressive goal of being done early.
The container now has a strange open feel to it and is surprisingly airy. The once dark cavern that sat in my driveway has been suddenly transformed into a sun-filled cozy space with lots of potential. Even my somewhat traditionally-inspired mother came by this week to see the project and suddenly found herself envisioning where she'd put HER furniture in it as a living space. Surprising that someone that lives in such a big house would want to live in my tiny glorified trailer home. :) I think small spaces are THE way to go, though I'll admit that standing in the studio, it now seems anything but small!
Now that all the openings are done and filled with glass, I've been working steadily on sealing up all the cracks and crevices. The corrugation has proved to be a bit of a pain and I chose to cut out about 40 individual filler pieces that are 1.5"x6" with the plasma cutter. It was nothing less than a miracle to me that after 3 attempts I was able to get a somewhat consistent cutting pattern down. It's becoming quite the piece of custom metal. These pieces were used to fill the gap on the top side of the windows and doors, but once welded into place I also had to go back and silicone seal up the tiny gaps to insure a water-tight seal. Ugh....it's taken a LOT of time to do this final external work. I'd hoped to be on to the internal wall framing and electrical install, but water-tight comes first and the coming rain tonight should be a nice test.
If all goes well in the next few days then I'll balance time in my motorcycle shop getting out customer bikes with attempting to put the internal wall structure up. Pics should follow sooner rather than later this time. Thanks for checking in!
Posted by Alan at 9:29 PM